On December 7th, we traveled to Boston for our first overnight tournament at BU. We won our pool for the first day against Ghostin (last year’s runner ups), Assumption College, and Tufts. We finished 3rd in the tournament after a tough loss to Northeastern in the third set at 18-20. We hope to learn from this experience and build towards our season. Special thanks goes alumni Eric “Team Mom” Moy and Niraj “Legendarily Average Setter” Patel for hosting the team in Boston! It’s always great to reconnect with our Alumni.

Check out our highlight video!

October was an eventful month. On the 19th, we had the pleasure of hosting UConn, UPenn, Columbia, Harvard, Brown, and UMass Amherst in the first ever Yale Invitational. Both Yale teams performed very well, placing 1st and 3rd in the tournament! With just a few hours to rest, we arrived at Brandeis University the next morning for the Brandeis Alumni Invitational. Although fatigued from the previous day, we were still able to place 3rd against the best teams of the region.

We have an excellent new class of YMV members: Paul Buckley, William Cai, Henok Addis, Nathan Fons, William Sun, and Theo Agbi! We look forward to competing on 10/19 at Yale and 10/20 at Brandeis! Schedule will be announced on our FB page.

Yale Men’s Volleyball is looking forward to building on last year’s successes and performing at a whole new level this year. Try out dates will be posted soon!

Yale finishes 8th in the Silver Bracket at Nationals!

Yale lands third in the NECVL.

Yale Men’s Volleyball has had an awesome year so far starting with a legendarily average start grabbing second place at the Brandeis Invitational.  The Bulldogs started their November off with 3 wins against Columbia, Dartmouth and Harvard!  In the last tournament of the semester, Yale went 5-2 to win the bronze bracket championship.  Yale placed 3rd at Interdivisonals, check out our highlights below our team picture. 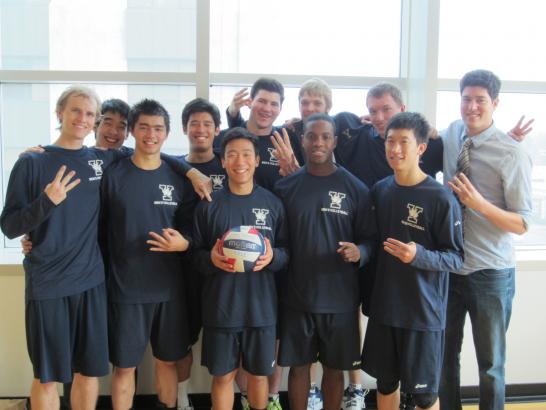 Below is our highlight video from the 2012 Nationals. Check out other cool videos on our Youtube Channel!